Specially commissioned for the Singapore Night Festival for Singapore's Golden Jubilee festivities - The Anooki celebrate Singapore by David Passegand and Moetu Batlle from France is a delightful visual display across the facade of the National Museum. Cute little kids with Minion like voices pushing blocks of rocks, throwing confetti, jumping into huge piles of red balls, running across the rooms, generally just having a ball of a time ! 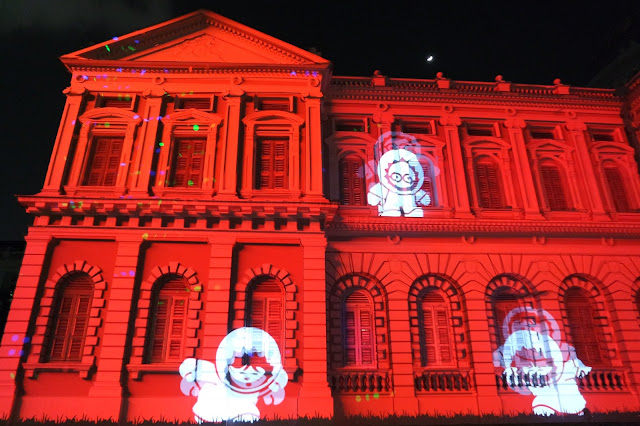 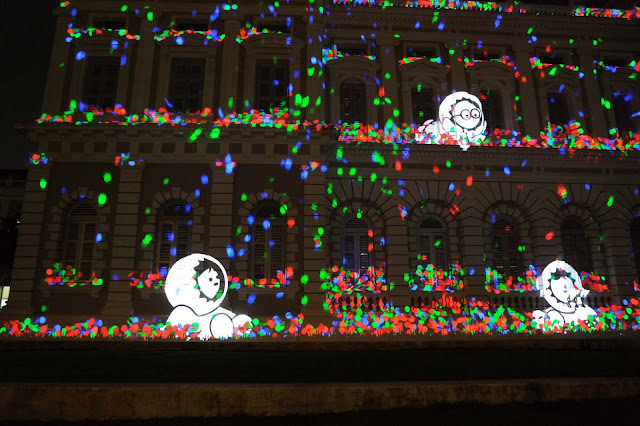 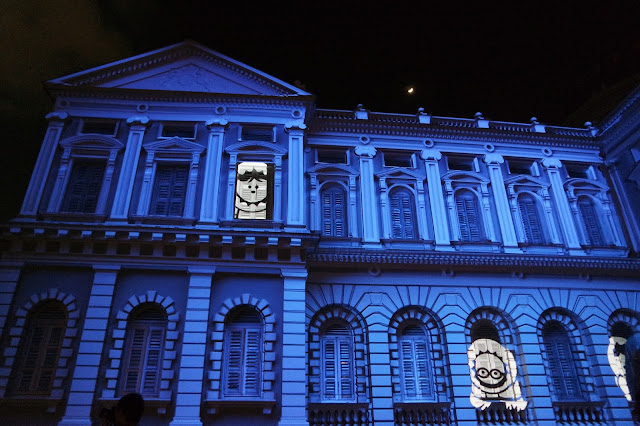 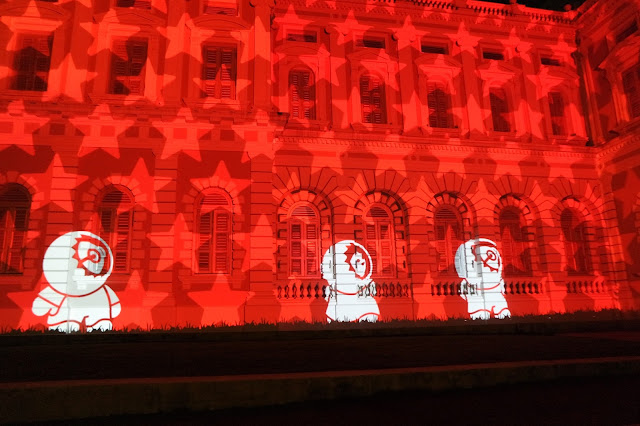 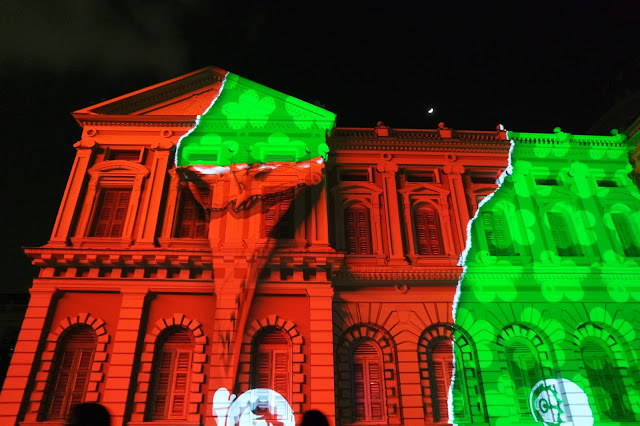 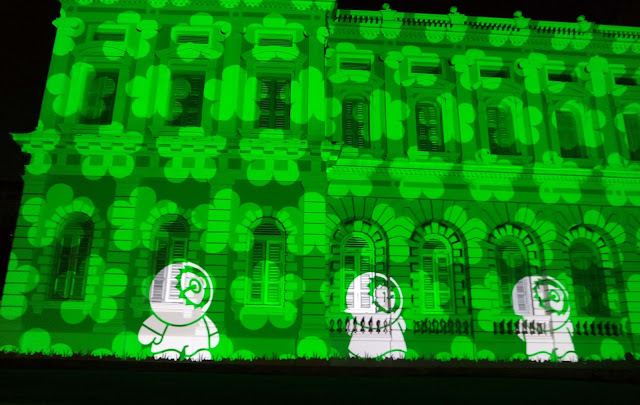 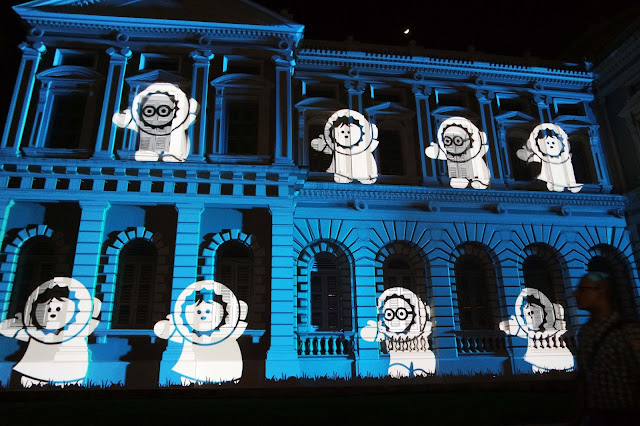 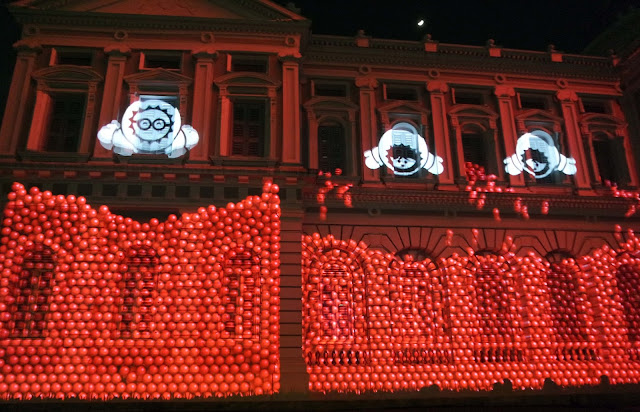 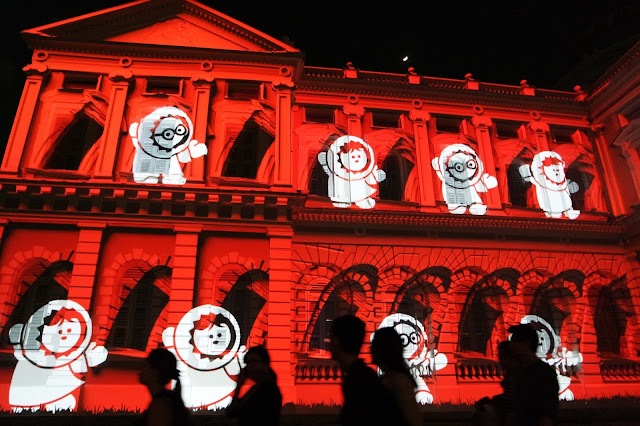 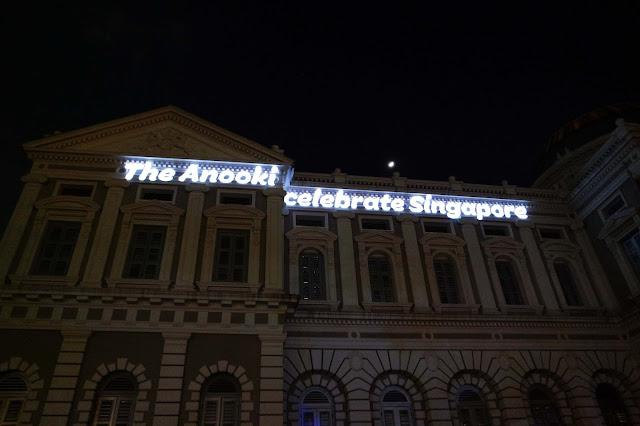 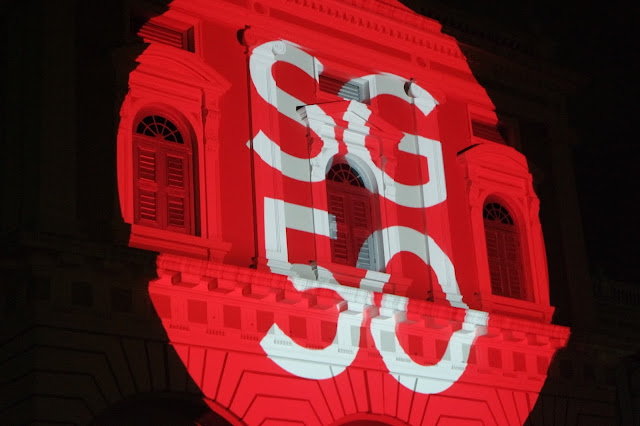 Posted by Smell the Coffee at 8:34 AM No comments:

The Singapore Night Fest 2015 is happening over 2 weekends from Saturday 21 Aug and the city centre is all decked up and alive with the most wonderful art performances and displays There is never a better time than now to be in Singapore for its Golden Jubilee !

Came across a simple yet immersive activity on Singapore Management University Square. Little coloured lights on the ground became instruments of play and art and families with children were busy doing their most artistic interpretations of whatever they could think of. Beautiful free play from a simple concept !

"The glow of lights warm the heart to home." 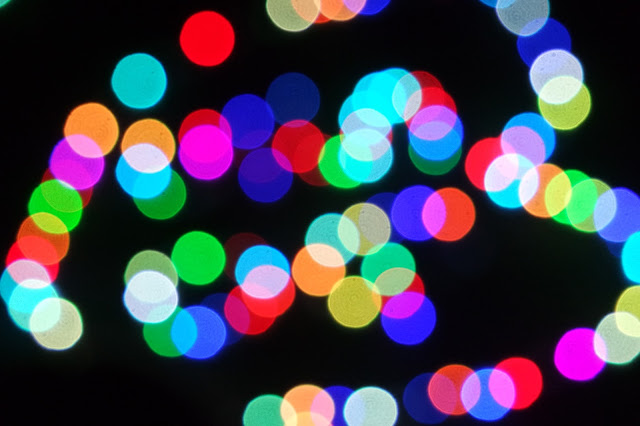 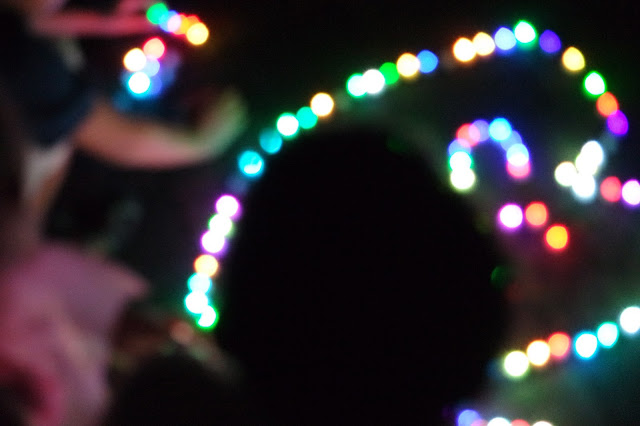 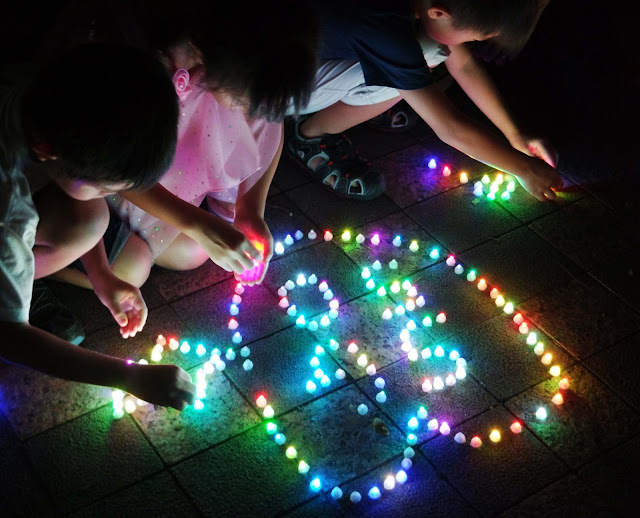 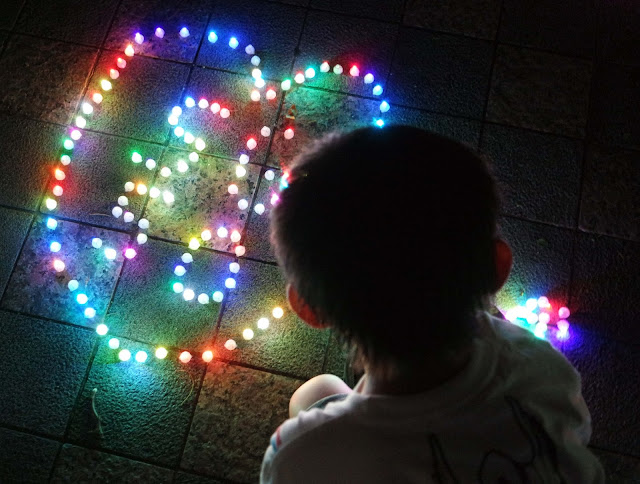 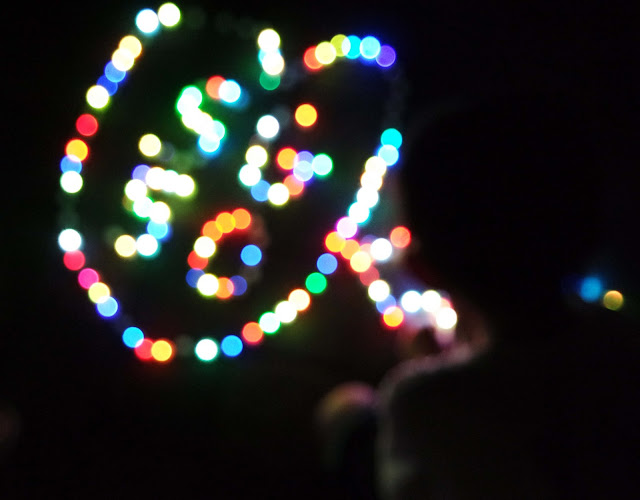 Posted by Smell the Coffee at 8:10 AM No comments:

Singapore celebrates its 50th year Golden Jubilee this year and Singaporeans from all walks of life were trying to get the best seats possible at this year's parade, the big actual event itself on the 9th August and if not, at least at the rehearsals. The highlight of course is the fireworks and hotels in the Marina Bay area get booked way in advance especially by Singaporeans so that they can get the best views of the fireworks from the windows ! For some families, this seems to be a yearly tradition. I never had that tradition but an invite from a friend of a friend gave me an opportunity to see what I have been missing out all these years.

The view from the 65th floor of Swissotel made me a little weak at the knees when I first looked out of the balcony but I soon felt better. Perhaps the scene before me made me soon forget how high I was above the ground. It was also quite a sight to see preparations before the show - tanks parked outside Suntec City, standing by to roll in, contingent upon contingent of uniform personnel from schools and institutions marching in the direction of City Hall , a big ice kachang prop that looked quite small from where I was and a colourful carousel of ribbons which were all part of the lineup for the night. The squadron of top air-force pilots and their dazzling aerial display was a big highlight of the Parade and this year for the first time, an SIA boeing plane with SG50 em blazed on it was part of the great performance.

When dusk fell, the whole landscape at the Marina Bay waterfront was spectacular but the moment that tugged at every Singaporeans' heart was the tribute to Lee Kuan Yew, our founding father that gave Singapore its strong foundation and made what it is today. Most poignant was a stalk of yellow orchids placed at the empty seat to remind us all of his presence. Sadly, he passed away in March this year and was never able to witness the spectacular SG50 celebrations this year. But his spirit lives on when we look all around Singapore today. 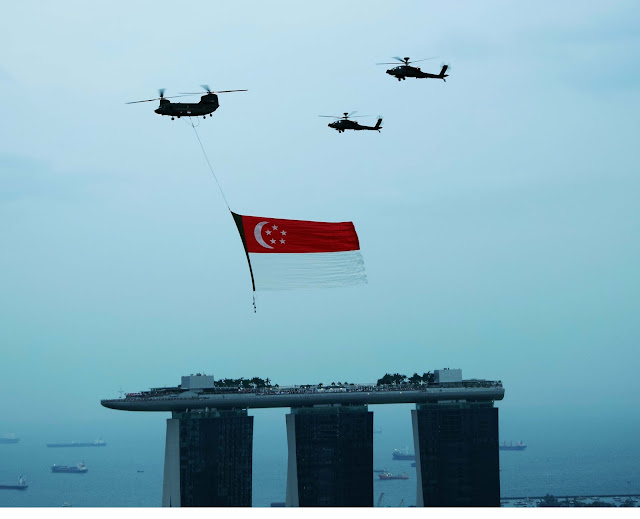 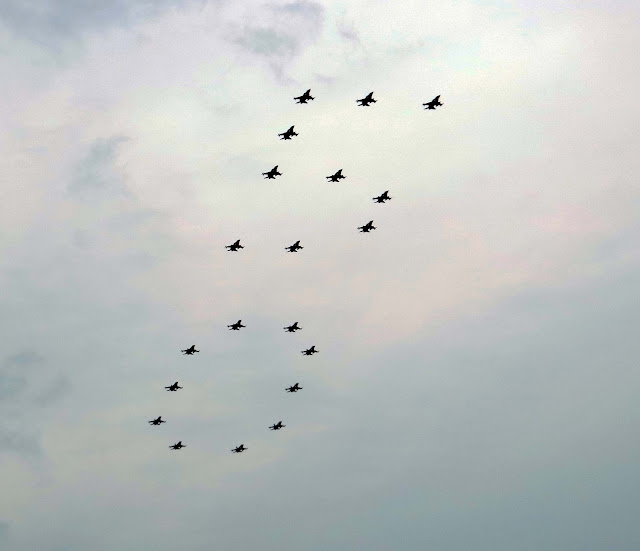 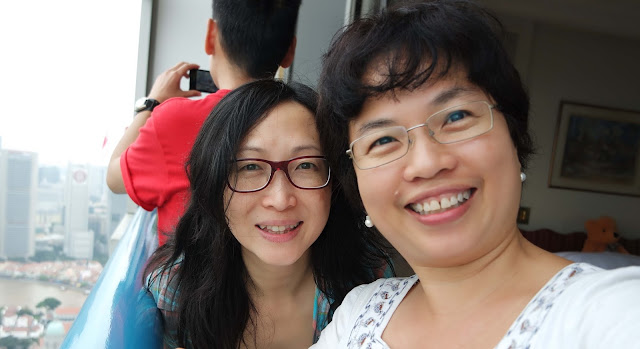 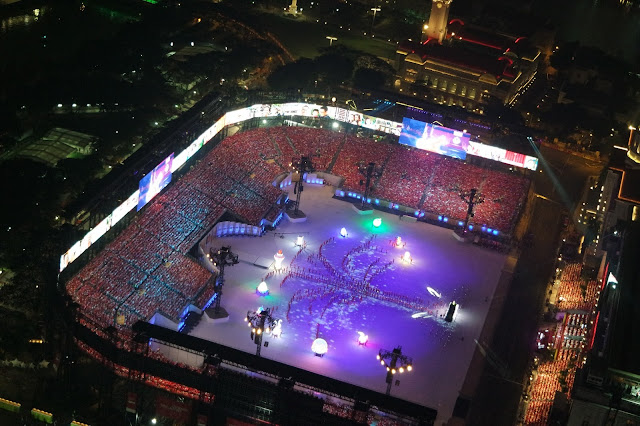 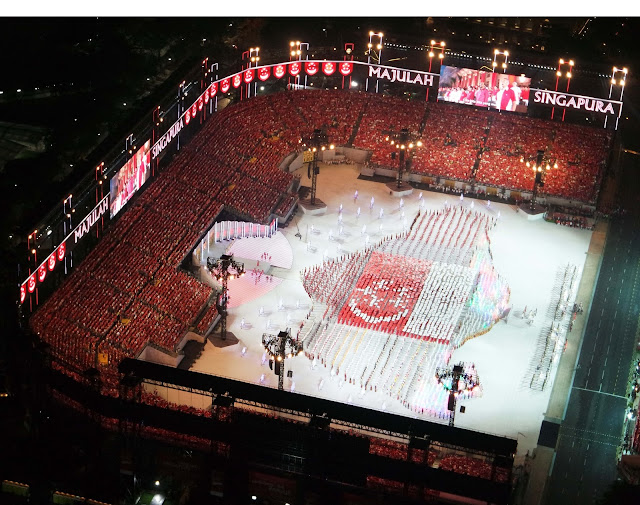 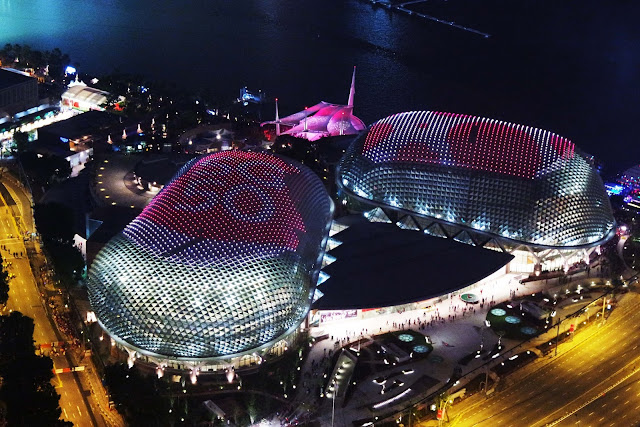 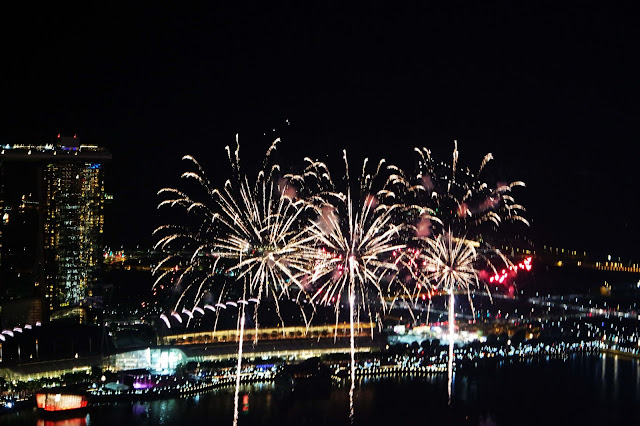 Posted by Smell the Coffee at 7:35 AM No comments: