I watched five of 2012 's Oscar nominated movies back to back in a movie marathon yesterday and was hit by a wave of history and nostalgia, where fashion, architecture, legendary artists and writers collide in a most inspirational way.

Martin Scorsese ' Hugo is one of the most beautiful movies I've ever seen. Set in Paris after World War 1, it tells the story of how an orphan who lives in the walls of a train station is wrapped up in a mystery involving his late father and an automaton. This movie is set in a time of great emancipation when pre-war values gave way to joy and revelry, particularly in the upper and middle classes in France. People knew how to have fun. It was the age of jazz where music hall shows thrived and cabaret acts like Josephine Baker became the toast of the town. The opera, the theatre and the cinema became increasing popular as well as the rise of a new art movement called art deco. At the same time, a real revolution began in woman's fashion.  Women began abandoning corsets and big hats that symbolised the pre-war reserve and in came a new age of elegance made possible by the greatest fashion designers of the time, like Jean Patou, Jeanne Lanvin, Paul Poiret and Coco Chanel.


While Paris in the 1920's was painted with such vivid child like imagery and colour in Hugo, the same city in the same time period was painted with different strokes in Woody Allen's Midnight in Paris. This movie tells the story of  a disenchanted Hollywood screenwriter played by Owen Wilson who gets to live his fantasy of living in Paris in the Jazz age of 1920s where legends in the artistic and literary world converged. He meets Scott and Zelda Fitzgerald, gets advice from the laconic Ernest Hemingway and manages to persuade Gertrude Stein to read the manuscript of his novel. In the midst of such mind boggling literary stimulation, he even falls in love with Picasso 's mistress.
Also set in the 1920's but in Hollywood is The Artist which focuses on the relationship of an older silent film star and a rising young actress as silent cinema makes way for the talkies. This movie took me by surprise and shows how charismatic actors and a fabulous story shine through even without sound. The 1920s are beginning to roar again  !
Posted by Smell the Coffee at 6:29 AM No comments:

I am looking forward to the December 2012 release of the movie The Great Gatsby, based on the book by F. Scott Fitzgerald whose works were most evocative of the Jazz Age in 1920s America.  The Great Gatsby was first published in 1925 when the American economy soared. It was also a time of the flapper girls, a new breed of woman who wore short skirts, bobbed their hair, listened to jazz, smoked, drove cars and had a great disregard for the social and sexual norms of the times. The Jazz Age was a period of great emancipation and the Great Gatsby is a novel that captured the mood and colour of this era most vividly.
At the centre of the story are Jake Gatsby, a mysterious millionaire who is obsessed with Daisy Buchanan, a lady whom he met while he was a young officer in World War 1. In the 1974 edition of The Great Gatsby, Jake was played by Robert Redford and Daisy by Mia Farrow while in the 2012 updated version by Baz Luhrmann, it stars Leonardo DiCaprio and Carey Mulligan in the lead roles.


I love the fashion of the roaring 20's , the hats and the dropped waist dresses plus chains of pearls and accessories. Looking back, it definitely had an effect on my wedding dress design including my hat. I remembered back in 1974, I was enarmoured by the white vision of Mia Farrow and Robert Redford  on magazine covers and today, I can't wait for the new movie. Hopefully, it might influence the fashion of the season again. 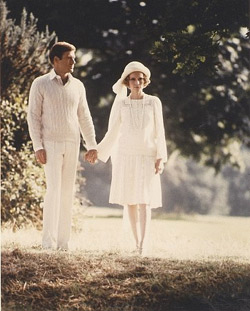 Posted by Smell the Coffee at 6:23 AM No comments: