If I had a choice between a Hilton or a Marriot and a boutique hotel, I would definitely go for the latter.

Boutique hotels range from quaint to stylish but the personal touches make all the difference. From ecletic and stylish furniture to more personal touches from hotel staff, that's the reason why boutique hotels are gaining popularity with many tourists. QT Gold Coast has so many of these quirky colourful touches that I just can't stop taking a closer look and snapping away. I wonder how their rooms look like. 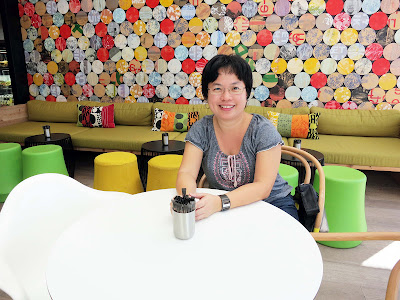 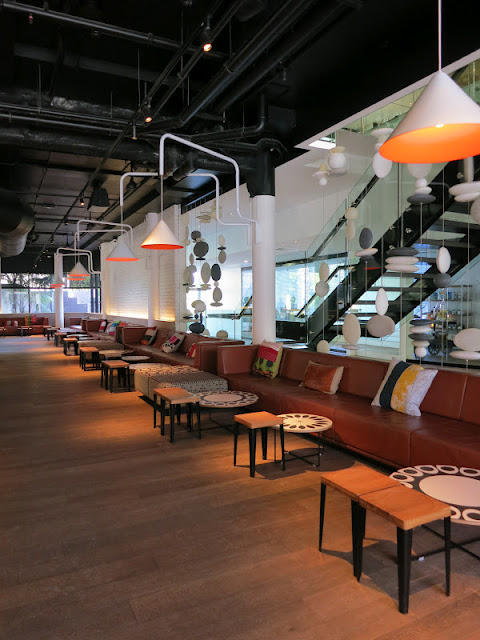 Posted by Smell the Coffee at 7:43 AM No comments:


When dense city living gets to you, Gold Coast Australia is really quite a breath of fresh air. Wide open spaces, large stretches of golden sands and a relaxed, carefree Australian vibe make the Gold Coast a great vacation spot for the family. Went on Scoot's first flight to Sydney on the night of June 12 and arrived bright and early on June 13 to a warm, sunny welcome to the Gold Coast. Though it was supposed to be winter, it was considerably milder compared to Sydney due mainly to its sub-tropical weather.Sun without the humidity. Singapore would be paradise if we had that.

First stop was Surfer's Paradise. In between breaks for a job assignment, I managed to capture some snaps of this "Baywatch" landscape. 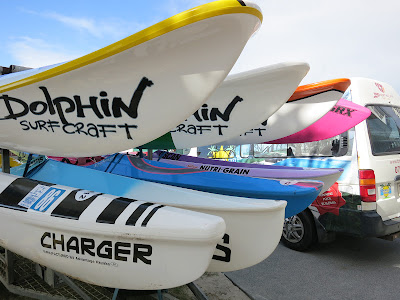 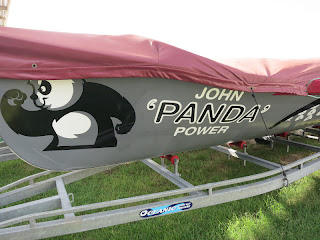 Posted by Smell the Coffee at 6:37 AM No comments: 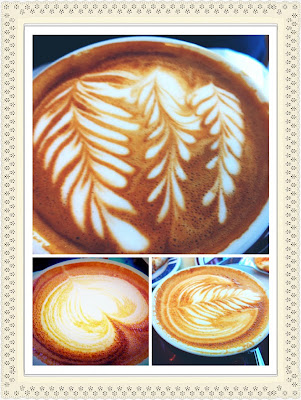 I never put too much thought into how good a croissant should be or taste. Local breakfast like mee siam, chwee kueh, vegetarian bee hoon are more my kind of indulgence. Some of my bread crazy friends have been talking about Maison Kayser and Paul Boulangerie in Orchard and I listen while thinking about dry mee pok noodles with vinegar, the best places for hokkien mee etc.

So when some bread crazy friends of mine started raving about some new bread place with great croissants, I was pretty nonchalent about it. But when I heard it was in Tiong Bahru, I lit up cos that was where my grandma used to live and I visited her very often for sleep-overs when I was a kid. The place has been sold many years ago but I still cherish the memories I had there.

So, off we went. Apparently, Gontran Cherrier, one of the marquee bakery names in Paris has now set up Tiong Bahru Bakery with some Singapore investors at Eng Hoon Street.

It was a lovely cafe, too crowded at times but the croissants were indeed different. It was crispy on the outside yet not flaky and fluffy when you bit into it. And the coffee came with such special touches. Love the 3 leave patterns best. I've often seen one leaf but hardly three at one go and nice touches like these with good bread made life a little more beautiful that afternoon.

Posted by Smell the Coffee at 6:13 PM No comments: 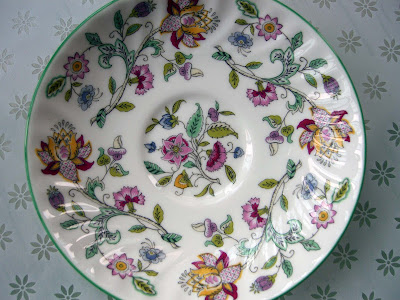 Bought a set of four Johnson brothers teacups and saucers today. The Johnson Brothers were a very famous tableware manufacturer and exporter which had its origins way back in 1883. It expanded rapidly in the early 20th Century and exported its tableware to all parts of the British empire. During the 1950s award-winning designs like "Old Britain Castles" and "Historic America", became very popular and the Johnson Brothers was given the Queen's award for their contribution to the British economy. However, its fortunes waned in the 1960s due to spiraling costs and competition and the company had no choice but to join the Wedgewood group in 1968. Johnson Brothers have since ceased production altogether in 2003.

Another saucer caught my eye. It was modern compared to the teacup set and at the back of the plate, it says Haddon Hall Minton bone China which is a classy modern interpretation of an English hall tapestry. Just like Spode ( another old English ceramics brand ), Minton had its origins back in the old pottery town of Stroke-upon-Trent in Straffordshire, England. Besides pottery, Minton is also famous for its art nouvea tiles such as colourful Majolica, popularly known here in Singapore as the old Peranakan tiles. It then joined the Royal Doulton Group but has since been  taken over by the Waterford Wedgewood Group in 2005 which produces most of its ceramics in China today. Such is the winds of change in the old English pottery business.
Posted by Smell the Coffee at 8:09 AM No comments: 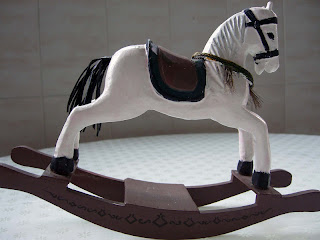 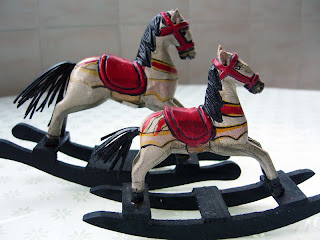 I love rocking horses and bought a pair of English vintage miniature ones from a really funny uncle who has decided to give up his hobby of collecting over the years. He then mentioned that he had a bigger one at home, similar in style to the ones I bought.  But when I came to his stall the following week, I couldn't quite believe he had painted it white. Regardless of how imperfect and stained it was, I would love it in its original form but the uncle proudly said "I painted it for you." That cracked me up and I didn't know what to say. He even gave me a charming wooden horse shoe, knowing how much I love horses. There's nothing like old school.
Posted by Smell the Coffee at 6:58 AM No comments: 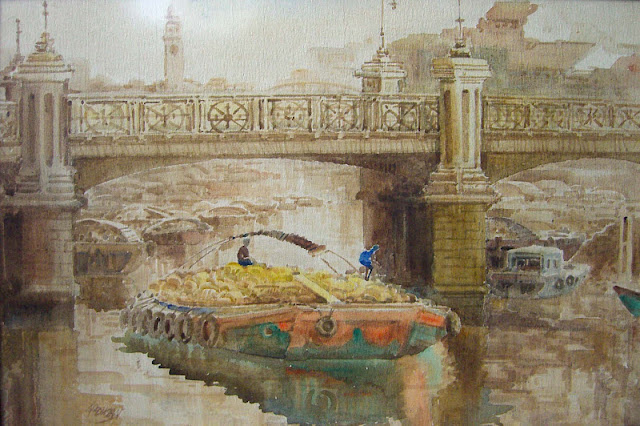 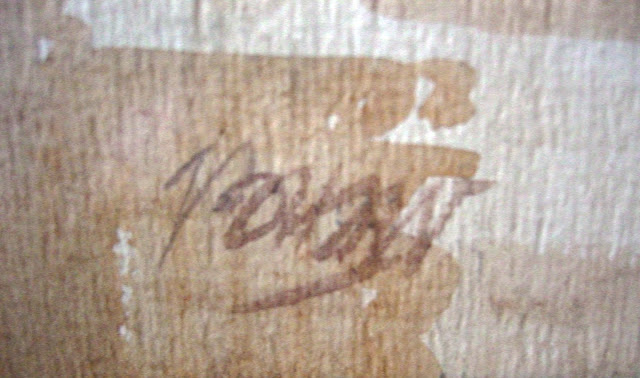 I recently had an old watercolour painting framed at a shop and the owner was most curious about its origin. The painting had the artist's signature on it but I couldn't really make out what it was. Curious, I went on the web to find out more about the history of watercolour painting in Singapore.

The Singapore Watercolour Society was officially formed in 1969 but prior to that, the art of watercolour had it early roots in the 1920s during the colonial period .
This is according to an article called Early Singapore Art: 1st & 2nd Generation at www.artcommune.com.sg/resourcesthe_sunday_group_18th_mar_2012.pdf

According to the article, a group of art enthusiasts would regularly meet up on Sundays to embark on painting trips. These artists from diverse backgrounds shared a common interest in water colour art and would come together to paint the Singapore River, the Merdeka Bridge, Chinatown scenes and kampongs on stilts. They were often referred to as the Sunday Group and many first and second generation Singapore painters such as Lim Cheng Hoe, Chen Chong Swee, Chia Wai Hon, T.Y Choy, Choy Weng Yang, Ong Chye Cho, Thomas Yeo, Gog Sing Hooi, Ong Kim Sengand Loy Chye Chuan had been Sunday Group painters at different points of their career.

There were 3 schools of art in Singapore's pioneer art days -the watercolourist, traditional Chinese and the Nanyang style of art. The medium of art depended on the different education models and art trainings the artists went through. Most watercolourists were part of the British colonial education system and were exposed to British styles including charcoal and pastel. According to the article, the Sunday group consisted of different people at different times and the practice continued all the way to the 60s and 70s.

The Singapore River was one of the more popular sites where the group gathered for their painting. This place was a key trading hub in early Singapore where coolies carried bags of rice up the bum boats. From there, it was ferried along the river and I've seen scenes like this in early black and white footage on TV. I believe Victoria Memorial Hall lies in the background of this painting but I wonder what is the name of the bridge. And most of all, I wonder who painted this water colour piece.
Posted by Smell the Coffee at 6:27 AM No comments: