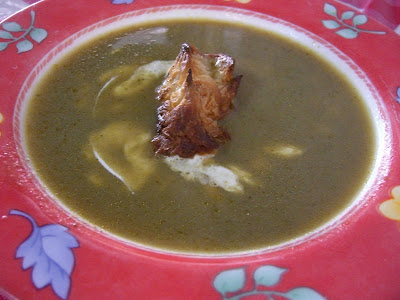 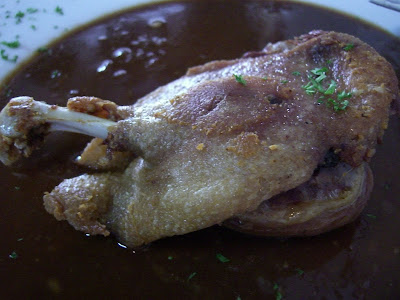 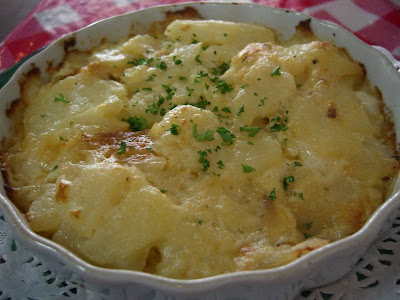 I 've always wanted to try my hand at French crusine and even bought a charming little book with a step by step guide. But before I do, think I should try out more of the real thing to see if I am on or entirely off the mark. So when a friend called to go for lunch, I suggested making our way to a little restaurant called La Petite Cuisine. The reviews I 've read so far were pretty good.
Just like its name, the place was really petite with only three or four tables inside. It was unpretentious and casual, with the cooking area just next to the dining area. Went for the confit de canard which came with the option of french fries or potato gratin. I chose the latter as I 've seen it in my receipe book and would like to find out how the taste was like.
The potato gratin was creamy, buttery, cheesey with a melt in your mouth taste. This potato dish is definitely worth trying at home because kids will love it. Moreover, the calories didn't matter to them.
As for the confit de canard, it was glorious ! The duck leg was crispy on the outside while moist and tender inside, going very well with the sauce that had a sharp and sweet taste. It could have been made with red wine vinegar. But this is one dish I won't be trying. Based on its taste, I'm sure it is a lot more complicated. Will definitely come to this place again for lunch with my friends as there are more French dishes I've yet to try.
La Petite Cuisine
227, Upper Thomson Road
Posted by Smell the Coffee at 7:06 AM