I am such a cheese novice. I don't really know much beyond Kraft cheddar cheese which my children love to grate over their spaghetti. I tasted sashimi as a kid and pushed it away like a spoilt brat but now, sashimi is one of my favourite foods.  As for cheese, it is a growing acquired taste. After lots of sampling in Spain and even locally, I am beginning to like it.  Saw this cheese chart in Jason's Gourmet Market and it kind of summarises the different kinds of cheeses out there.  Picture is not as clear as I like it to be, so I've rewritten it.

FRESH CHEESES - RICOTTA , MOZZARELLA, BURRATA
Smooth, creamy and moist, these cheese have not been rinded and still possess a tangy, milky and buttery flavour.

FIRM CHEESES - COMTE, JARLSBERG and MONTERY JACK
Dense in flavour, these cheeses are pressed during the curdling process

HARD CHEESES - PARMIGIANO REGGIANO, GRANA PADANO and PECORINO ROMANO
Aged for at least 6 months or more. They are dry, crumbly, hard and slightly fluffy in nature

BLUE CHEESES - ROQUEFORT, STILTON AND GORGONZOLA
These cheeses have a sharp and steely blue finished flavour caused by the blue green mould throughout the curd

SMOKED CHEESES - SMOKED ITARARITI, SCAMORZA AND SMOKED CHEDDAR
Smoked using a variety of wood. These cheeses have a more intense and unique flavour. 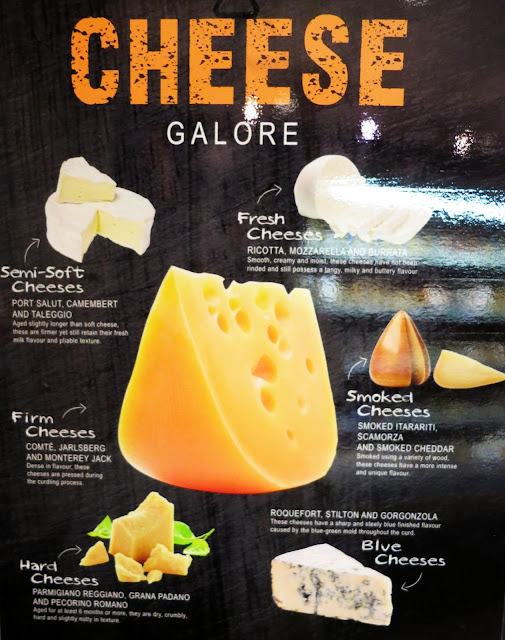 Posted by Smell the Coffee at 7:58 PM