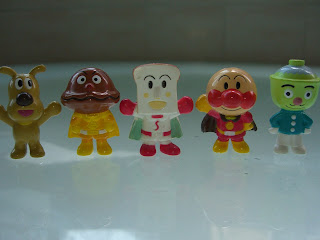 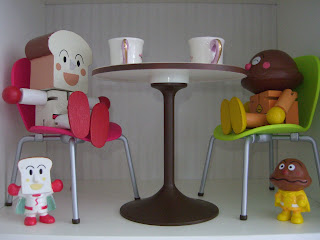 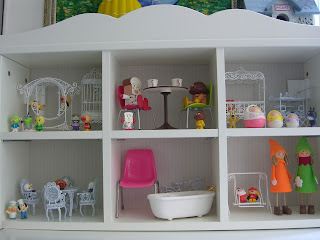 Visited the China Square flea market last Sunday and it was crowded with buyers looking for collector's toys especially Japanese manga characters. Amidst the Gundum, Sailor Moons and Pokemons, I spotted some odd looking Sega characters. One carried a slice of bread as a head and another had one of a Japanese soup bowl. I couldn't resist them...all 22 different oddities packaged in a bag.


The lady who sold them to me mentioned that her friend in Japan collects them. Tried searching for their real names on the net and found that they were super popular Japanese anime characters based on children's favourite snacks and food. No wonder they appealed so much to me ! The lead character Anpan man (sweet bean paste bun man) is the one with the round face and his pastry friends include Skokupanman (Mr Slice Whitebread ) and Currypan man. They are the ones sharing jokes over a cup of tea in my doll's house.


Skokupanman is cool and level headed while Currypan man has a quick temper. He really can't help it as his head is filled with spicy curry ! Anpan man 's other friends include Melonpanna (a melon filled bun girl), Rollpanna, (you guess it ! some form of bread roll), Cheese (the dog) and many more.


Is Anpan Man a hero ? Well, he tries to save the world not by his physical strength but rather by sacrificing himself. For instance, he saves a hungry boy by allowing him to eat part of his head ! There is definitely some dark humour going on there. But fret not, Ojisan (Uncle Jam ) revitalises him by baking him a new head each time. Yes, logical .....I think I'm getting addicted.


Like all heroes, Anpan man has an arch enemy - Baikin man (Germ man) whose aim in life is to destroy Anpan Man and turn the world into Germ World. His weakness - soap. Kids, wash your hands before you eat your snacks !
Posted by Smell the Coffee at 1:51 AM