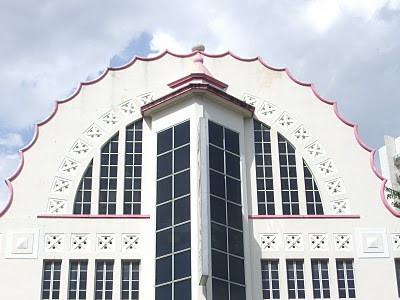 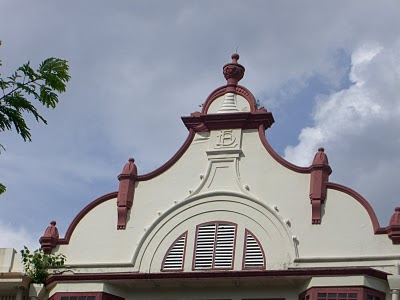 It is a human habit to take for granted one's own environment and to look to other places and countries as having "greener and more beautiful pastures". Didn't realised that Singapore is actually quite beautiful. Most people say it is a great place to live if only the weather was better. When I travel, the first thing that strikes me when I touch down back in Singapore is how clean and green it is compared to other modern cities. And with all the fanfare about how fabulous the skyline of Singapore has become with the opening of new developments in Marina Bay, I much prefer the conservation buildings all around. I love the juxtapose of new with the old as it brings out a beautiful contrast.
Singapore has gone through quite a number of architectural trends which can be divided into these phases , pre-war and post war, modern and post-modern. Pre-war buildings consist of a mixture of colonial British architecture which includes black and white bungalows, neoclassical and renaissance colonial government buildings such as the Supreme Court, City Hall, the Post Office (now the Fullerton Hotel), beautiful Peranakan houses, landmark buildings of worship such as St Andrew's cathedral and shophouses while post war, we see the emergence of art deco buildings such as the Asia Insurance Building. Then came the modern phase marked by "cookie cutter" standardised public housing. Aesthetically not pleasing but I suppose there wasn't much of a choice as there was a huge housing shortage for a growing Singapore, struggling after its separation from Malaysia. It was the most pragmatic thing to do. And when things really took off in Singapore , it ushered in an era of post-modern architecture with sky scrapers such as the OCBC building, designed by the world famous architect I. M Pei. During that time, corporations were trying to outdo each other in terms of how high their building would go compared to the other. Glad that silly era is over. Then came the conservation era which was about the rediscovery of Singapore's architectural heritage. It led to an active conservation programme and historial buildings such as the National Museum of Singapore as well as old crumbing Peranakan houses were beautifully restored.
And now, Singapore is in the phase of building iconic buildings which would put her on the world map such as the Esplanade (locals refer to as the Durian) and the latest Marina Bay Sands. These are modern signature builidings but as seemingly grand as they are, I still love the phase of restoring old buildings best. The above picture shows 2 buildings near the Doby Gaut MRT station. Don't you think they both look like vintage headboards for a bed or maybe the traditional headgear of a Polish or Russian dancer. Most likely, they were built during the art deco phase as they were in close proximity to the Cathay at Handy Road, one of the first art deco buildings in Singapore. My dad said the Cathay was once the tallest building in Singapore during those days and it made me laugh.
Posted by Smell the Coffee at 5:00 PM