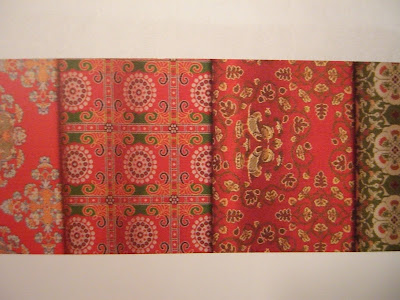 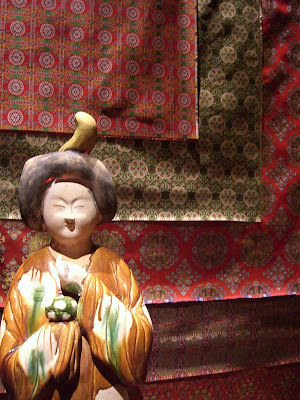 When I think of the Silk Road, I recall the days of the popular Japanese documentary series of the same name back in the 80's, tracing the actual journey of the greatest trading route in history. This memory comes along with the famous Silk Road tune by Kitaro. The Silk Road didn't refer to one single path but a collection of them. One thousand years back, they were crucial for cultural, commercial and technological exchange between traders, merchants, soldiers and nomads from Ancient China, India, Tibet, Persia and Mediterranean countries.
Silk wasn't the only commodity traded though it was one of the most highly prized for its vibrant colours and superior patterns and the secret of how it was made was highly guarded by the Chinese. The Silk Road exhibition in the Arts Science Museum traced the route covering Xi'an, the imperial capital of the Tang dyasty which held the secrets of sericulture (raising worms to make silk) to Turfan - famous for its night market of heady fragrances such as jasmine and rosewater, Samarkand - famous for the craft of papermaking to Baghdad - a hub of commerce and scholarship.
One of the exhibits at the museum - modern reproductions of Tang dynasty silk which are kept and preserved by the Japanese royal family. The repeating roundel patterns seen in the silk fabrics above is Persian in origin but Tang weavers often used it in their work. Lions paired within roundels were common motifs in ancient Iranian artwork and the Tang Chinese artists adapted this to include animals significant in their own culture such as mandarin ducks. There was a rich cultural and artistic exchange that took place over trading on the Silk Road.
Posted by Smell the Coffee at 5:30 AM