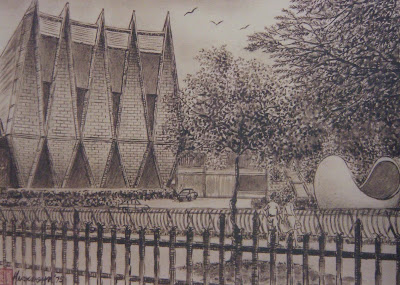 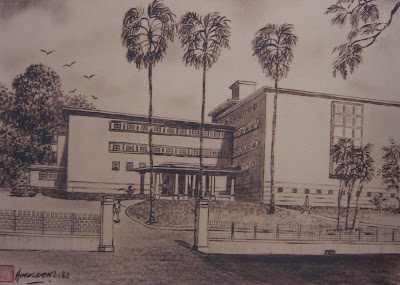 The first National Library (1960-2004)
Was looking at some print drawings of old Singapore at a little stall run by an elderly couple and had that warm nostalgic feeling again. Some of these old sights have been thankfully restored and live on gloriously amidst the Singapore landscape but sadly, some have disappeared completely.

Bought prints of two buildings which I remember well and are now completed gone. The first was the National Theatre situated at the junction of Fort Canning and Clemenceau Avenue. It was officially opened on 8 August 1963 to commemorate Singapore's self-government and was the first and largest theatre in Singapore back then with a capacity of 3240 seats. Designed by a local architect named Alfred Wong, it had a striking huge cantilevered steel roof with a 5 pointed facade representing the five stars of the Singapore flag while the outdoor fountain was supposed to represent the crescent moon. Another unusual feature or lack of it was that it had no side or rear walls. Only the huge roof provided some form of shelter from rain which didn't help if it was pouring cats and dogs and the rain came in sideways. Of course, it was a simple beginning for a young nation and though it wasn't air-conditioned, that didn't stop a lot of great names back then who came to perform and Singaporeans from all walks of life who came to be captivated.
My biggest memory of the National Theatre was when I was around 5 years of age. After a dance performance which I don't quite remember much of, I spotted a familiar fresh face at the top of the spiral staircase within the theatre. She was the legendary Taiwanese songbird Teresa Teng who was regular feature in variety shows on our black and white television in the 70s. Sadly such a historic and beautiful building was demolished in 1986 as defects were found in its roof. Think they should have made a bigger conservation effort to preserve it as it was Singapore's first theatre, funded publicly from donations. Trishaw riders in 1960 donated their day's takings while some even donated bricks. With such stories behind it, it was definitely a worthwhile heritage site. Besides, architecturally, it was a memorable building unlike many of today's nondescript looking ones. Even the Van kleef Aquarium which was situated on its grounds was demolised along with it. As a child, I was captivated by the legend of the man eating pirannas that were a major exhibit at the aquarium. Ah ...simple times and simple pleasures.

The second was Singapore's first National Library at Stanford Road. Built in 1960, it was demolished in 2004 to make way for the Fort Canning Tunnel. To demolish this grand dame which held so many fond memories for Singaporeans just to make way for a short tunnel was totally unnecessary, a sentiment felt by many Singaporeans. However, the controversy surrounding the building's demise has been credited for sparking greater awareness of local cultural roots and heritage conservation among Singaporeans. But it is sad that this building had to be sacrificed before the realisation.

I remember the days when a trip to the old National Library with my classmates was such fun. Giggling and yet trying our best to keep it under control in the library and the simple delight we shared while tucking into the delicious wanton noodles at the little eatery right in front of the library. Somehow food always tasted better while we were growing up. Down the sentimental lane once again.
Posted by Smell the Coffee at 5:39 AM

I enjoyed reading this post on the Van Cleef Aquarium and the National Theatre. What struck me then, as a child, was a the large shark in one of the tanks. I 'watched' my first Chinese Opera (Journey To The West) with my mom at the National Theatre!