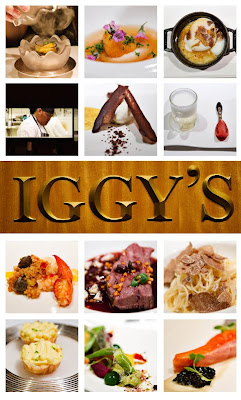 Singapore is considered by many as a food paradise for its rich variety of ethnic food and flavours. However, in terms of gourmet food, only two Singapore restaurants have made it to the top 50 of a much watched ranking of the world's best restaurants. One of which was Iggy's at Regent Hotel which was also voted by the inaugural Miele Guide in 2008/09 as Asia's best restaurant.
Besides the Miele Guide, there's the S Pellegrino World's Best Restaurant awards, given out every year by Britain's Restaurant Magazine with votes from chefs, food critics, leading restaurateurs and well-travelled gourmands. Though not as established as the Michelin stars, these awards which were first given out in 2002 have begun to gain prominence in recent years.


Recently, I was lucky enough to be invited by a friend for lunch at Iggy's which made it to number 28 on the top 50 list. It had jumped 17 places from its 45th position last year, no mean feat considering the intense world competition.


I was seated at a very pivotal postion, in view of the kitchen and what was extraordinary was the ethnic diversity of chefs. This was what a marvellous culinary experience should be - a fusion of cooking styles and a melting pot of flavours. What I experienced that afternoon was pure gastronomical delight ! To start off , I had an amuse bouche, a clear tomato liquid with a slice of sweet tomato. It was refreshingly good and it was fascinating to have a clear liquid extracted from a tomato. Then Hamachi with radish, sesame and fine herbs - a small portion tasty enough to just whet the appetite. Clam rissoto - which I must confess was slightly disappointing as the rissoto didn't taste smooth and rich enough against the earthy sea taste of the clams. More to come....cod fish pan seared to seal in its juicy and wonderful flavour . Only the simplest cooking style can bring out the freshness of the best cod fish and of course, Iggy's famous sakura ebi cappellini with konbu, infused with the most flavourful scampi olive oil. Sakura ebi prawns are from Japan and are not easily available except at Japanese specialty supermarkets and Iggy's probably imports its own. Then came a wild mushroom flan that simply melts in the mouth . My favourite main courses were the wild mushroom flan and the sakura ebi cappellinilini. Lastly, dessert - a mango pudding with a fascinating range of citrusy flavours, tart and sweet. I didn't take any pictures that day as I wanted to focus on the food but I wished I had.

The best part of the experience is the inspiration this lunch has given me to experiment with new flavours. Inspired by the sakura ebi cappellini, I actually came up with my own version of prawns with angel hair ( the closest thing to cappellini ) infused with a crispy shrimp and prawn chilli oil with a tinge of balsamic vinegar. My kids enjoyed it very much and it has provided a good alternative to tomato sauce based pasta. Must now find the time to experiment with a mango dessert that is not just creamy and rich but tart and sweet.
Posted by Smell the Coffee at 8:07 AM