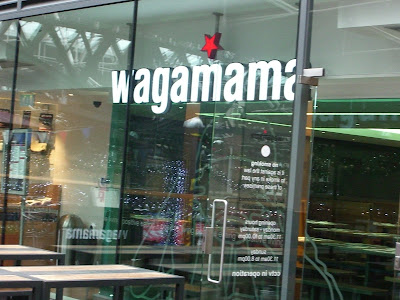 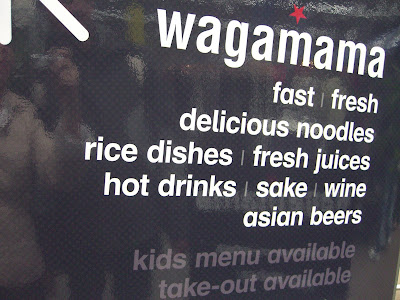 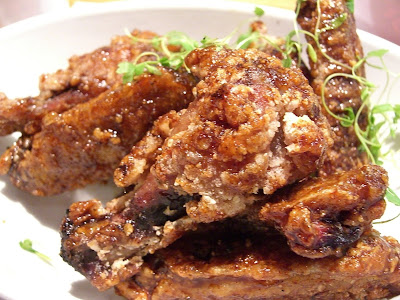 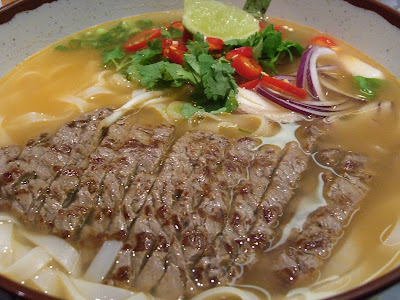 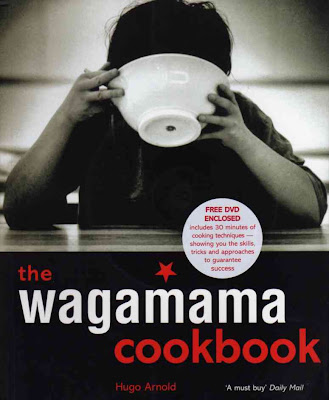 As an Asian, I can't keep away too long from the familiar sweet, salty and sour flavours of Asian food. They provide a source of comfort and some of my favourites include clear Asian soups as well as rice noodles in a rich and flavourful stock.

While in London, after one too many days of room service and meaty dishes, comfort food was what I was looking for. And at the old Spitalfields market, I chanced upon the ramen place Wagamama with my friend. The name and branding sounded familiar as I have a Wagamama cooking book on my book shelf. Wagamama is a chain of pan-Asian restaurants modelled after Japanese ramen bars. It was first started in 1992 in London and since then, the franchise has gone on to Sydney, Amsterdam, Los Angeles and more. The menu consists of ramen, udon and soba main meals as well as side dishes and desserts. Orders are taken on a handheld PDA and sent electronically to the kitchen. The waiter then scribbles the order number on the paper table mat.
I ordered spicy noodles and beef, (substituting the ramen with rice noodles) hoping to get a nice, fiery kick as well as side dishes of duck gyozas and chicken wings tebasaki with special wagamama bbq sauce. Must say I was disappointed as there wasn't any kick at all and the soup was sadly lacking in flavour. With the huge competition between ramen restaurants in Singapore, this wouldn't pass the test. The duck gyozas were over fried and hard but the chicken wings were quite good. My friend ordered a miso based ramen which I had to sample. At least that tasted slightly better.
Perhaps it is too fusion a place for me to expect a pure Asian taste. When I am in Chinatown in any one of the bigger cities, one instinctive guide that I use before entering a Chinese restaurant is to check the number of Caucasians in it compared to Chinese. At least it gives me an indication of how authentic the food is. I once made a mistake of asking a New York cab driver to bring me to a good Chinese restaurant. He raved about his favourite and brought me right to its doorstep. Hungry as I was, I couldn't make myself eat the huge ping pong balls masquerading as wantons. The wanton skin was so thick that they could possibly bounce back if you hit it against the wall :)
Posted by Smell the Coffee at 3:00 AM