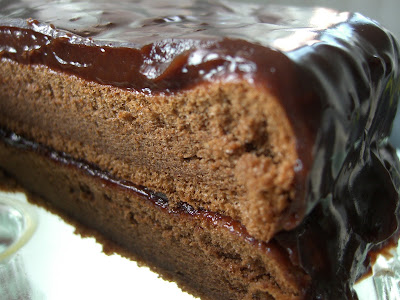 Today, I made a chocolate fudge cake from a receipe given to me by a friend some 20 years ago. I 've misplaced the receipe since then but found it just the day before, stashed in one of my old books. What is charming about it - the receipe was typed out using a typewriter and it probably belonged to my friend's mother. This cake isn't as fattening as a rich chocolate cake as olive oil is used for the chocolate sponge and the presence of hoon kue flour (green pea flour) in the fudge makes this receipe somewhat Asian in origin. Hoon kue flour was developed by the Chinese in Indonesia and is widely used in Asian kuehs (cakes and desserts) today. In this receipe, the hoon kue flour is mixed with melted chocolate, sugar and instant jelly for the fudge topping.
Posted by Smell the Coffee at 3:43 AM

This is such an awesome cake from ou the way it looks. i am looking around to find a good recipe to bake for my husband's birthday. Do you mind sharing the recipe with me? My name is Serene too. My email is serenealh@yahoo.com.sg.

Thank you so much!
Have a good day!