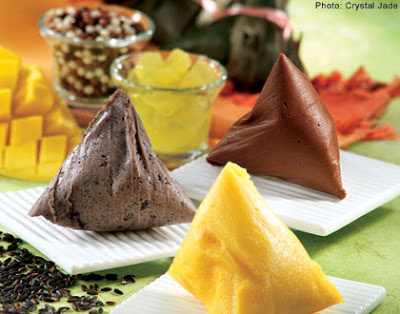 Today, the Chinese celebrate the Dragon Boat Festival which marks the 5th day of the 5th month in the Chinese Lunar Calendar. Also known as Duanwu jie, it commemorates the life and death of the famous Chinese scholar Qu Yuan, an upright and loyal minister to the King during the Chu dynasty. When he lost favour with the king due to court conspiracies, he was disheartened and expressed his anger and sorrow through poems. He eventually took his own life by jumping into the river. The local people desperately searched for him in their boats and threw rice dumplings into the river so that the fishes would not eat his body. Thus every year the Dragon Boat Festival is celebrated to commemorate this attempt which comes with the eating of rice dumpings (steamed glutinous rice wrapped in bamboo leaves) .
The Dragon Boat festival is deemed a public holiday in China, Taiwan and Hong Kong though not in Singapore or Malaysia even though there is a sizeable population of Chinese. Like mooncakes, the simple rice dumplings in Singapore have begun to take on a whole new dimension. To attract a young generation , Crystal Jade My Bread outlets in Singapore have rolled out enticing flavours like lychee, chocolate and pulot hitam, in pudding or mousse-like texture. When it comes to food, Singaporeans like to stretch their creative boundaries.
Posted by Smell the Coffee at 6:48 AM