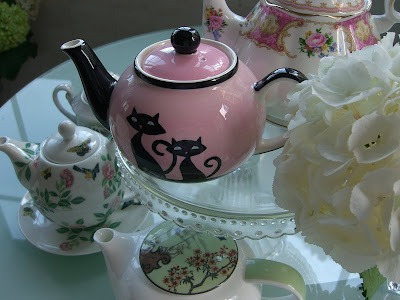 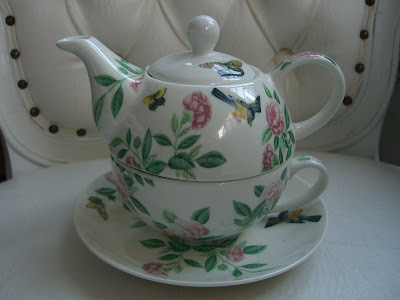 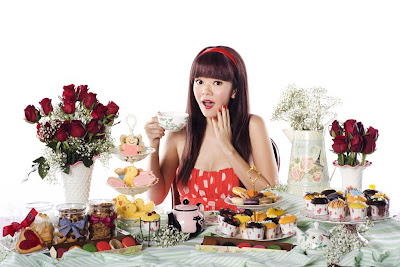 I love collecting tea pots and cups but learned to control myself over the years as I was running out of cupboard space. The last tea pot I bought was from Victoria's basement in Sydney early this year and I couldn't resist it as it was going at 50% off its original price. The fact that it was the only piece available left me no other choice. I had to have it. It was part of a V and A ceramic range based on the design of a water colour hand painted wallpaper which is on exhibit at the museum in London. The box mentioned that this wall paper was presented by the Chinese ambassador in 1800 to the owners of Shemfold Park, Sussez in England. And while I was at it, I too bought a set of matching two tier cake stand.
Cake stands, teapots, tea cups are found in every corner of myhouse, some stashed away in cupboards while others fulfill a more functional role such as holders for knick knack , vases etc. My 2 girls who have not inherited any of my girlish tendencies despite being at a more appropriate age have always laughed at my fetish for tea sets. Finally put some of my collection to good use when they were used for a shoot featuring Barberella , one of Singapore TV's most adored characters played by Michelle Chong. When I showed my kids the picture, they didn't get the point of how functional Mummy's playthings can be. All they asked was "How come you didn't bring home the cupcakes and sugar ducks for us ?"
Kids :)
Posted by Smell the Coffee at 6:54 AM