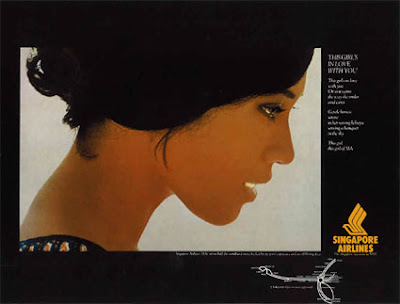 We may just be a little tiny country in Asia but we are big in a lot of ways. I remember a conversation I had with an American years back in Los Angeles. When he asked me where I was from, I mentioned Singapore and he said "Oh, Singapore as in Singapore Girl ?"
"Yup!", I responded.
"That 's a very good airline but where is Singapore exactly, is it in China ?" he asked earnestly.
I do hope people from different parts of the world know where Singapore is today. The brand image of Singapore Girl is one of the first few we had after independence. Launched in 1972, she was one of the most iconic symbols in the world and today, she makes the news once again as SIA announced its plans to roll out its new fleet of advertisements , thrusting her back into the spotlight. She was languishing a little over the past few years, with her image taking a back seat to the gadgets and gizmos that have given SIA a competitive age. Yes, the seats are great and the in flight entertainment superb but it is nice to balance it with the soul of the company. Nothing endures better than one strong image. I do remember those great advertisements of the earlier days where she treads the world in her iconic sarong kebaya with the theme song playing gently in the background. In the late 80's, these ads would play almost every night after the news on Ch 5 and I actually looked forward to the country she visits each time.
Singapore Girl, you're a great way to fly !
Posted by Smell the Coffee at 8:39 AM